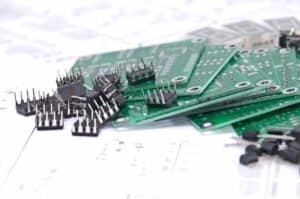 Modern society is saturated with printed circuit boards. Despite this, it can be difficult to explain such a technical field to those looking to gain entry or even just knowledge.

Regarding layout design, I like to start with a classic topology logic puzzle: on a piece of paper, draw three evenly spaced houses on a line, and somewhere above or below them, three evenly spaced utilities (gas, electricity, and water). The goal now is to connect all three houses to all three utilities in the plane without crossing any lines or passing lines through houses or utilities. No matter how the lines are drawn or in which order, fitting the last connection in will prove impossible. This problem, known informally as the “three utility problem,” gives good motivation for using vias in layout.

Most boards, instead of three “components” and nine connections, feature hundreds and thousands; modern PCB design is several times more constrained and flexible than the puzzle. To achieve a design that maximizes space and performance, layout work begins before a single trace is run between parts. Mastering PCB layout basics will help designers increase efficiency during board design and improve manufacturability.

The basics of PCB layout can be outlined as a five-step process:

At this point, the significant layout tasks are complete, yet the precision work of manufacturing remains distant. The best-laid board can rapidly become scrap with poor instructions provided to the shop. To combat this, designers need to furnish manufacturing artwork that is unambiguous and goes beyond the minimum callouts to anticipate potential deviations:

Mistakes and refinement are a natural part of designing printed circuit boards. As the board develops from proof-of-concept to prototype to mass production, certain design strategies may fall into disfavor that scales poorly in cost or ease of manufacturing. This may include small to moderate changes like a reduction in via count or alterations to circuitry (new packages, new components, etc.), or on the extreme end, a reduction in layer count. While it’s infeasible for a designer to be able to predict alterations based on market whims or an expansion/contraction of circuit functionality, a well-designed board during the initial stages of product development will ease the challenge of future revisions.

Your Contract Manufacturer Is Anything But Basic

PCB layout basics are easy in theory to disseminate, but every board will have its quirks. The best remedy is a design team acquainted with various board styles. However, no one has seen everything in PCB, it is much easier for those with considerable experience to adapt to the evolving needs of a board or the industry in general. For that reason, we here at VSE see ourselves as particularly well-situated for the challenges of modern PCB design. As a team of engineers, we build electronics for our customers – it’s that straightforward. Alongside our valued manufacturing partners, we provide exceptional PCBs in several life-saving fields.

If you are looking for a CM that prides itself on its care and attention to detail to ensure that each PCB assembly is built to the highest standards, look no further than VSE. Contact us today to learn more about partnering with us for your next project
Category: BlogBy VSE | Engineering TeamJanuary 19, 2023
Share this post
TweetShare on Twitter Share on FacebookShare on Facebook