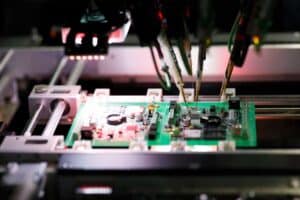 Have you ever finished a movie, novel, or another piece of rhetoric and immediately rushed online to see if you missed any deeper meaning? We can gain a greater appreciation for stories when we can put them in context or gain insight into themes, symbols, or other narrative devices. A good storyteller weaves these into a plot without drawing overt attention to them, making them something enjoyable to discover.

Electronics, however, are not somewhere where you want to have features obscured or hidden. In-circuit testing combines passing boards from bare board testing and passing components procured for assembly. Thus, it can be seen as the first major post-assembly test to determine the validity of a handful of processes, namely placement, and soldering. While in-circuit testing can’t ascertain how the board functions (function testing reserves this important task), it can inform testers whether the board does or does not function and, more specifically, where the errors occur.

In-circuit test (ICT) equipment comes in two primary flavors: flying probe and bed of nails. Though they both perform the same basic function, the mechanisms differ wildly. For both, a conductor must contact a test pad placed on the board at the design stage, which corresponds to some network. The flying probe utilizes an array of probes that rapidly move across the board following programmed instructions. At the same time, the bed of nails constructs a specific fixture where spring-loaded pins contact and disconnect from the board as necessary.

Both have advantages: the flying probe is cheaper per design and preferable for prototyping, where the cost and time investment of a fixture would slow turnaround time. Bed of nails realizes significant time savings in high-volume lots due to its high per-board operating speed.

The remainder of this article will focus specifically on the bed of nails configuration; however, the less specific characteristics of the ICT will remain applicable.

What can an in-circuit test detect? Because it occurs after the assembly process, in-circuit testing can check for many standard failure modes, including:

Though this detection is important for quality purposes, there is also a financial motivator. The earlier you catch these defects, the less money spent on rework and, in the worst case, shipping and handling costs after the product has reached store shelves or the end user.

A Deeper Dive Into Test Types, Considerations, and Challenges

In-circuit testing encompasses a host of smaller evaluations and measurements. These subtests can be grouped between pre- and post-power applications to the system. The test criteria for power-off can be roughly related to measurements of resistance in the system, while power-on is a bit more eclectic, tending to measure the performance of the device rather than a passive value:

The test protocol proceeds in a linear fashion that reflects the chronology of the manufacturing processes and the increasing complexity of the analysis. First, open/short tests are conducted that serve as validation for both the fabrication and soldering processes. Next, basic component testing is performed, such as resistor measurement, capacitor charging, and measurement of forward/reverse diode biases. ICT then concludes with tests involving active analog and digital components.

To best understand the operation of these tests, it is necessary to discuss the underlying principles of ICT structure. An ICT fixture requires physical access to the test points on the board as well as the ability to isolate these components to track individual parameters. The former is only constrained by the precision of the bed of nails and layout design choices to promote boundaries between surrounding pads and components. Still, electrical isolation is a bit more involved.

Analog components are easy enough to measure, at worst, only requiring guarding on networks that include shunt paths to prevent current from traveling through the component under test. Digital components, however, are a completely different animal, requiring the system to cycle through all possible data inputs (for a two-input logic gate, this would require four pin-unique logic states). Complicating the issue further is that a network of digital components may have their inputs pre-determined by devices upstream in the logic flow. To counteract this, the ICT can temporarily force the IC inputs to the desired state by a process known as back driving. Similar techniques also exist for interrupting feedback loops and testing components branching off a common bus where, without isolation, it would be impossible to pinpoint the point of failure.

In-circuit testing is a complicated and exhaustive process that automation instead of human operators mercifully handle. It can quickly determine whether a PCBA passes an extensive list of common manufacturing and device failure modes, and for a bed of nails specifically, it can be quickly ramped up to meet lot size needs. There is still an art to programming an ICT, as well as tracing any failures to an earlier point in the production, and an experienced assembler can wield the system as a quality and diagnostic tool.

Your PCB design is only as good as the assembler, and we here at VSE are committed to building electronics with our team of knowledgeable engineers. Partnered with our valued manufacturing associates, our foremost goal is the long-term reliability of every board that passes through our facility.

If you are looking for a CM that prides itself on its care and attention to detail to ensure that each PCB assembly is built to the highest standards, look no further than VSE. Contact us today to learn more about partnering with us for your next project.
Category: BlogBy VSE | Test DepartmentDecember 13, 2022
Share this post
TweetShare on Twitter Share on FacebookShare on Facebook