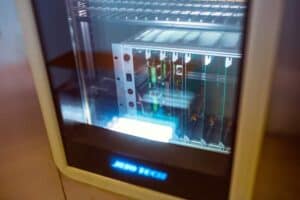 Reliability is paramount to how electronic products and brands are perceived. For most people, electronics troubleshooting goes as far as swapping batteries or disconnecting/reconnecting power. I’m reminded of when I fixed an LED end lamp for my mom by noticing a resistor was no longer making contact with the circuit. After a quick run to a friend’s house to borrow a soldering iron, I reestablished continuity. I was lucky that this was about as minor of a fix as possible, but tasks like these are not always something a person has the knowledge, tools, or time to handle.

Manufacturers are vested in testing PCBs to verify and refine production processes. The earlier they catch design or production errors, the less time and money will be lost. To meet the challenging standards associated with making PCBs, manufacturers employ many quality assurance tests as feedback.

Looking At  (and Through) Boards for Manufacturing Process Validation

Visual inspection forms an invaluable lead-in to reliability testing. Advancements in optical technology have increased the throughput of these systems while increasing total accuracy. What’s more, the implementation of machine learning has enabled deep learning models in optical machines that analyze and improve their processes with large enough sample sizes:

Once the inspection has concluded, the board is ready to test properly. Though the specific feature or functionality under testing may differ, the general purpose is to assure the board will operate as intended in conditions similar to what it will experience as a final product:

Your Contract Manufacturer Is Up To The Mark of PCB Testing

Testing PCBs is as involved and technical as their construction, and for a good reason: shops want the confidence of knowing their methods are sound before engaging in mass production or further processing. End-users demand highly reliable devices that meet their expected service life with minimal (ideally, zero) interruptions. There is no singular analysis that can accurately diagnose a board at any stage of design. Still, a composite of several tests can paint a full picture with varying levels of destructibility. If your boards are experiencing issues, whether in production or out in the field, VSE can help. At VSE, we’re a team of experienced engineers who build electronics for our customers. Coupled with our trusted manufacturing partners, we aim to deliver nothing less than excellence in all our PCBs.

If you are looking for a CM that prides itself on its care and attention to detail to ensure that each PCB assembly is built to the highest standards, look no further than VSE. Contact us today to learn more about partnering with us for your next project.
Category: BlogBy VSE | Test DepartmentDecember 1, 2022
Share this post
TweetShare on Twitter Share on FacebookShare on Facebook