Through Hole vs. Surface Mount: The Battle Isn’t Over 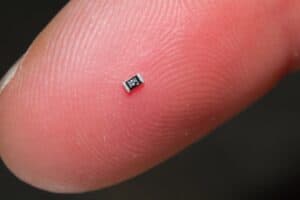 A funny thing about physicists (or physics students) is they can describe the complex phenomena occurring within modern electronics but don’t always trust them to fill out your BOM. Case in point: while building out a prototype for a tachometer project with a fellow student, we made the mistake of purchasing several surface mount components instead of through holes. At this point in my education, I knew better too, but I didn’t review the order in time before it was placed.

While SMT is typically renowned for its small package size, this was a detriment to our level of design; we could fit numerous chips within the opening of a breadboard’s node. Though it may be a problem that is unlikely to affect most designers, this story underlines that through-hole vs. surface mount technology is not an entirely open-and-shut case.

Through-Hole: An Older, But Not Antiquated Technology

The first time working with components for hobbyists and students is almost certain to be through-hole technology. Though they may initially be used in an educational prototype like a breadboard, they are equally compatible with a fabricated board as an end-use product. The leads of through-hole components are placed through drilled holes in the PCB board. Then a soldering process, either automated or by hand, forms a joint between the through-hole pad and the lead at the reverse side of the board.

Though its size is a double-edged sword in many ways, certain through-hole packages are more compact than others, dependent on the lead placement relative to the package. Axial leads run parallel to the length of the body, while radial leads extend downward from the package body; the classic example is a resistor and ceramic capacitor, respectively. For less impacted designs, the advantage gained by switching from axial to radial lead components may be minimal. Still, it is an optimal tool for integrating through-hole components in dense assemblies.

SMT: The New Kid On The Board

SMT features heavily in mass-produced boards for a good reason: dense designs cannot afford to use through-hole components in the literal and figurative sense. HDI boards or similarly styled designs usually boast a high net count and a corresponding amount of components to interface with. Regarding package density, it’s no contest: literal dozens (and sometimes more) of SMT components can take up the same amount of space as equivalent through-hole packages. Because SMT is the more efficient package design and drives the market, ICs that take the place of several individual components may not even be found in an equivalent through-hole package. Some additional considerations in favor of SMT:

Your Contract Manufacturer Can Brainstorm Through Hole vs. Surface Mount Assembly Solutions

Is there a clear-cut winner in the bout of through hole vs. surface mount? Hardly; both technologies are likely to be used in different design stages. Even though SMT has a marked advantage in mass production, through-hole components may still end up a part of the final assembly for a multitude of reasons. It’s far more likely that many designs, absent additional constraints, are likely to include some mixture of SMT and through-hole technology due to the relative advantages of each package style. If you need support in optimizing your BOM for performance or production, VSE can help. Here at VSE, we’re a team of engineers that builds electronics for our customers. Alongside our valued manufacturing partners, we’re committed to producing a board that meets the modern demands of industries.

If you are looking for a CM that prides itself on its care and attention to detail to ensure that each PCB assembly is built to the highest standards, look no further than VSE. Contact us today to learn more about partnering with us for your next project.
Category: BlogBy VSE | Engineering TeamNovember 15, 2022
Share this post
TweetShare on Twitter Share on FacebookShare on Facebook

How to Design a Circuit Board for a Slot Machine
November 10, 2022