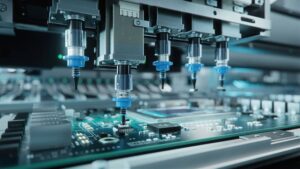 Technical terminology is a necessary part of any industry. As a topic’s specificity increases, so do the need to quickly and accurately convey information without room for ambiguity. Conversations lacking in this specificity can result in misinterpretations during design and manufacturing, sometimes severe enough to warrant rework or scrapping.  However, technical terms, like any language, evolve as certain items fall into disuse or are replaced by new technology or paradigm. Though it may be hard to imagine, PCB has officially existed conceptually for over one hundred years, and in a fast-paced industry like this one, language usage fluctuates. PCB vs. PWB is an example of this – a distinction that is much more informal in usage than anything, commonly interchangeable, but usually referring to the two major manufacturing portions of circuit production.

What Separates PCB vs. PWB?

What separates a PCB from a PWB? A PCB is a fully-assembled PWB; to put it another way, every PCB is a PWB, but not every PWB is a PCB. A board is often called a PCB regardless of its assembly status. Although PWB is a bit outdated, most users in the industry would not be overly concerned about the conflation between the two terms. To further complicate the matter, there are explicitly defined terms for an assembled PCB: a PCB assembly (PCBA), a printed circuit assembly (PCA), or the industry-preferred circuit card assembly (CCA).

It’s far more likely that readers would intuitively understand the name “printed circuit boards” if they have some passing familiarity with the industry, but “printed wiring board” is a bit more opaque. Most designers are unfamiliar with wiring at the bare board design stage, and most common associations wouldn’t fit with the term. Wire bonding denotes a semiconductor-specific fabrication process, while processes like wire wrapping and point-to-point construction fall more towards the prototyping end of the design, with the latter falling into extreme disuse except for the term extending to breadboard usage. As it turns out, “wire board” likely originates back to the initial genesis of modern electronic design when Albert Hanson began developing an alternative to telephone switchboards.

The fabrication process to produce a PWB is long and intense. It involves physically binding, stripping, and adding features sequentially, promoting structural integrity and long-term reliability. Material and process selection confers various properties to the final board and must be carefully considered between the design team and fabrication shop.

Broadly, fabrication can be grouped into a few different sub-categories:

If the bare board is akin to the construction of a house, assembly is the furnishing process. Turning a PWB into a PCB is a less intensive step than combining and processing materials into the base of the electronics, but don’t be fooled: modern PCB assemblies can require thousands of components, some so small that tens of them can easily fit on a fingertip. Assembly needs to balance speed and accuracy for economic viability. This rule extends backward into component selection, as SMT has rapidly replaced through-hole technology due to size and additional considerations like the associated soldering process.

Before soldering, the board’s components must be accurately placed, including the alignment of the package’s rotation with the associated land pattern. This is usually performed with a pick-and-place machine, which can easily populate boards with tens of thousands of components within an hour. Pick-and-place machines can be separated into chip shooters, which are higher volume and less accurate, and flexible placers which have lower throughput but greater accuracy. Roughly speaking, the accuracy of a device, and its associated placement technology, can be sorted as shooters for passive and flex for active.

The board must undergo a soldering step to fuse components to the board once they are set in place. The style of the process and the total number of soldering passes will depend on whether the components are SMT, through-hole, or a mix of the two. For SMT, the board runs through a reflow oven to melt the tacky solder paste that temporarily holds components in place into a more lasting bond. Wave soldering, on the other hand, has a molten wave of solder flow across the underside of the board, joining solder to a through-hole pin and its surrounding pad.

The final step of assembly, like fabrication, is testing. Assembly tests are more in-depth than fabrication because integrating electrical components with the bare board changes the underlying parameters under consideration. These tests must determine not only the quality of the placement and soldering but also the overall functionality of the board – does the design perform what it purports to do?

Whether Bare Boards or Assemblies, Your Contract Manufacturer Has You Covered

PCB vs. PWB is less of a competition and more of an understanding of how two entirely different yet complementary processes combine to create the electronic devices that permeate consumer and industry devices. Many of the modern world’s marvels and conveniences arise from an exceedingly complicated manufacturing industry that has continuously honed itself for most of the last century. Yet the current pace of development continues to push electronics – and production – to tighter tolerances and new challenges. Whether it’s prototyping or mass production, you need a contract manufacturer who is well versed in the current design methods and is at the cutting edge of technology. We at VSE are here to help! We’re a team of engineers committed to building electronics for customers, and with our manufacturing partners, we strive to deliver a board of the highest quality.

If you are looking for a CM that prides itself on its care and attention to detail to ensure that each PCB assembly is built to the highest standards, look no further than VSE. Contact us today to learn more about partnering with us for your next project.
Category: BlogBy VSE | Engineering TeamSeptember 29, 2022
Share this post
TweetShare on Twitter Share on FacebookShare on Facebook