How to Avoid Electromagnetic Interference (EMI) in Printed Circuit Boards

Long before the cell phone and the internet, many relied on the good old citizens’ band radio, or “CB,” for our social media. Being voice only, it was more restrictive, but it was also kind of charming to just talk to folks through the radio—until my neighbor down the street powered up. Running much more power than what the FCC allowed, his interference dominated the local frequencies, and you wouldn’t be able to get a word in edgewise until he shut down.

Interestingly, after all of these years, I can still remember how annoying that interference was, which is why I have a lot of respect for the electromagnetic interference, or EMI, on a PCB. A circuit board can be the recipient of EMI unless preventative measures are taken in its design. The PCB you design can also create EMI with other electronics if you don’t take the same precautions. This article will look at some of these precautions and how to avoid electromagnetic interference in PCB designs.

The Challenges Created by EMI 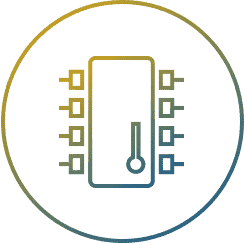 The general effects of electromagnetic interference between electronic devices are noticeable. Wireless communication systems are interrupted by unexpected broadcasts, automotive systems may malfunction, and advanced sensors used in medical or other applications may not transmit the complete or correct data. Some entertainment venues will combat this by requesting that wireless devices be deactivated during a performance. Flight attendants still make a similar request before the takeoff and landing of commercial flights. Even back in CB radios’ days, we learned to avoid revving our cars’ engines to reduce the engine noise from our transmissions. But EMI prevention goes much further than that, and there are many different design standards in place to specify how much interference is or isn’t allowed:

However, the issues with EMI go a lot deeper than how radio is affected in a car or whether or not a wireless microphone picks up a stray signal from another source. Within the circuit board itself, EMI can disrupt how the board works. Computer systems rely on the clear transmission of their data and memory signals between processor and memory devices and on and off the board to those external system ports where they are connected. Interference here can create a lot of background noise, raising the ground reference level, which can cause a signal to be misinterpreted at the wrong state. Interference like this can create intermittent issues or outright failures of the system. Next, we’ll look at what causes some of these EMI challenges on a printed circuit board.

While there can be many different sources of EMI on a circuit board, here are some of the main ones to be aware of:

To prevent these scenarios from happening, consider implementing the following design techniques on the board:

Many other PCB design methods can help control EMI on your circuit board, and here is where you can find more information on those.

Additional Help on How to Avoid Electromagnetic Interference

The PCB contract manufacturer that will be building your board can usually give you a lot of help to control EMI on your circuit board design. For instance, one of the most important methods of preventing EMI on a circuit board is choosing the best configuration of the board layer stackup. The PCB CM will have plenty of experience building different circuit boards, and they will know the best layer stackup plan for your design.

At VSE, we have been working with customers like you to build precision circuit boards for over 30 years. Our engineering team understands the electrical and manufacturing requirements that must be met to build each design successfully. This expertise gives them the ability to advise you on the right layer configuration necessary for the best signal integrity performance and many other design measures to keep EMI under control.

If you are looking for a CM with the engineering capabilities to ensure that each PCB assembly is built to the highest standards, look no further than VSE. Contact us today to learn more about partnering with us for your next project.