How to Reduce Parasitic Capacitance in PCB Layout 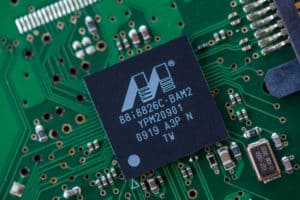 Can you spot where parasitic capacitance occurs in this PCB layout?

The term “parasitics,” as used by PCB designers, generally refers to any unwanted signal or power integrity effect in a PCB layout that can be modeled with a capacitor, inductor, or resistor. Parasitics are everywhere in an actual PCB layout, and they govern desired and undesired electrical behavior when it’s put into operation. For advanced circuit boards, like RF circuit boards and high-speed digital boards with large signal bandwidths, parasitic capacitance is the primary concern.

What is Parasitic Capacitance?

Parasitic capacitance refers to an effect in a PCB layout where a propagating signal appears to behave as if it has interacted with a capacitor. This definition does not refer to a literal capacitor. Instead, signals propagating in certain regions of the PCB layout will behave as if a capacitor can divert the signal away from its intended channel, and the signal will see capacitive impedance along this alternative propagation path. High-frequency signal content can easily pass through this capacitor as a displacement current because the impedance will be lower than low-frequency signals.

Parasitics capacitance is responsible for several desired and undesired effects in a PCB layout, including:

Example of parasitic capacitance between two microstrip traces and between the two traces and the nearby ground plane.

General Tips to Reduce Parasitic Capacitance in a PCB Layout

The primary function of parasitic capacitance is to modify the path traveled by electromagnetic waves along an interconnect. This modification produces the following effects:

The simple solution is to increase the spacing between the interconnect and any conductors that are not the desired reference plane. During design, the width of traces on a PCB should be carefully designed to account for any nearby conductors, especially nearby copper pour, to create a coplanar trace arrangement.

Copper pour issues are a common cause of the signal integrity problems listed above. An interconnect designer should take time to calculate the minimum clearance required between copper pour and their traces to ensure impedance control. Minimum clearance calculations can be performed with 2D or 3D field solver applications. An example calculation for Isola 370HR laminates with 50 Ohm CPW microstrips and striplines is shown in the graph below. After selecting the substrate height and determining the required trace width without copper pour, the curves below can help determine the minimum required clearance to prevent excessive impedance modification. 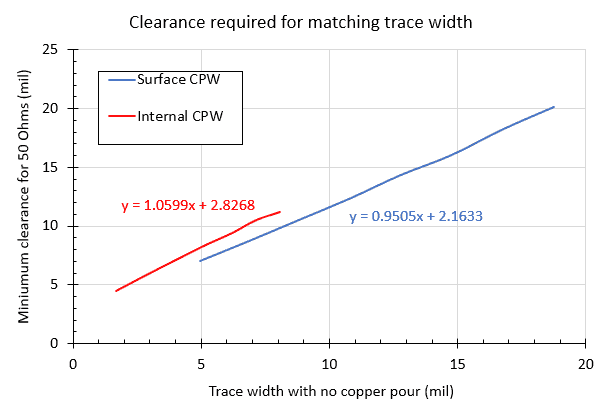 Example of parasitic capacitance between two microstrip traces and between the two traces and the nearby ground plane.

Parasitic capacitance is both desirable and undesirable in power integrity. We can see this by comparing the structure of a PDN in a circuit board with a system involving multiple grounds. One common instance where parasitic capacitance is undesirable is found in systems with multiple ground points, such as a PCB power supply ground plane, a system ground region, and chassis ground. In these systems, and especially in high-current power supplies, parasitic capacitance can exist between the PCB ground planes and the chassis ground, allowing common-mode currents to travel through the system and radiate strongly. 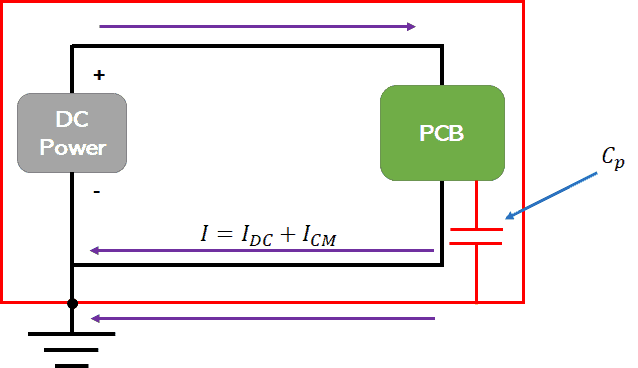 This diagram shows how parasitic capacitance to a device chassis will create a path for common-mode current when the PCB ground plane and the chassis ground are at slightly different potentials.

Contrast this with a high-speed multilayer PCB. In these PCBs, the PDN should be arranged with at least one power/ground plane pair placed closely to provide high parasitic capacitance. This arrangement will help keep the PDN impedance at a low value over a broad bandwidth, which aids dampen power rail ripple when components on the board switch. The solution to high PDN impedance and imbalanced grounds are the same: use additional low ESL capacitors to provide decoupling and counteract noise.

At VSE, we understand the need to reduce parasitic capacitance in a PCB layout. We can help pinpoint potential SI/PI problems in your design before you send it into production. We also use the same types of sophisticated test methods used by high-volume CMs. If you’re designing advanced boards, like high-speed/high-frequency PCBs, take advantage of VSE’s design services and proprietary test methodology for evaluating board functionality.

If you are looking for a CM that prides itself on its care and attention to detail to ensure that each PCB assembly is built to the highest standards, look no further than VSE. Contact us today to learn more about partnering for your next project.
Category: BlogBy VSE | Test DepartmentJune 15, 2021
Share this post
TweetShare on Twitter Share on FacebookShare on Facebook